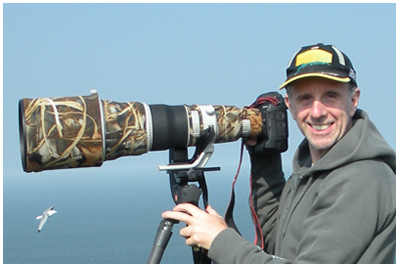 Robin’s interest in photography was ignited at a young age. His Grandfather, a keen black and white enthusiast, would let Robin help him develop prints in his darkroom. Robin went on to study photography, fine art, and graphic design in the mid-'80s. On leaving college he pursued a career in Graphic design and in more recent years photographic art direction, mainly in the automotive industry.

He spends most of his spare time looking for ‘the perfect capture’.
Will he ever achieve it? Who knows!

As children, many of us have fancied ourselves as lawyers, architects or doctors, only to change our fickle minds several times as we grew older.
Hailing from Essex, north-east of London city, Robin Lowry is one of the few people whose childhood ambitions endured the turbulent waves of adolescence and emerged intact — his dream of working in the photographic and image creation industry. Owls dominate most of Robin Lowry’s portfolio, yet one can never get bored. For such small creatures, they are surprisingly capable of a wide range of emotions – from looking regal and majestic, to downright grumpy, or simply adorable – all of which he has captured in perfect shots. A winner of many wildlife competitions and awards such as Digital Photographer of the Year 2014 (Wildlife Category) and appearing in the RSPB calendar and next year's Wildlife Trust calendar to appearing in photo magazines from Europe as far away as Malaysia. If you see an image on Robin's Flickr stream or on his Facebook page that you like and you want a print, let us know and we can get it done for you.
Next
Previous